ComSTAR Self Contained headsets are “All in One” full duplex transceivers that feature miniaturized wireless circuitry built right inside the earcups. This streamlined design is a breakthrough because it eliminates the belt pack radios that are required with traditional headset communication systems. Up to eight users to talk simultaneously just like on a regular telephone within a 400 yard range enhancing jobsite productivity and safety. ComSTAR provide ease operation and outstanding full duplex voice communications across a multitude of industrial applications.

ComSTAR headsets are field programmable. Select the system from the drop-down list below and add components expanding the talking pattern as your needs grow.

Available in sets from 2-8. Get a discount on multiple sets.

ComSTAR full duplex wireless are designed for industrial production teams that need instantaneous, “hands free” voice communications. These revolutionary intercoms are not voice activated and there is no delay when transmitting. The system allows up to eight users to talk simultaneously just like on a regular telephone within a 400 yard range enhancing jobsite productivity and safety.

All complete ComSTAR systems include one XT Com Center, a mini base station that acts as a signal relay. This centralized main transmitter features 2 channels of communication and is totally portable for on location jobsites. The ComCenter is powered by AC wall plug, rechargeable lithium Polymer battery, or disposable AA battery sled. (all included).

Up to eight ComSTAR headsets can be connected in full duplex through a single Com Center. These self contained workhorse wireless feature a powerful duplex transceiver built right inside the earcups. This no-nonsense “All in One” configuration eliminates belt pack radios that are required with traditional wireless headsets. Lightweight and rugged ComSTAR headsets care designed to take the hard knocks of demanding, industrial jobsites.

ComSTAR utilize powerful Lithium Polymer batteries that operate up to 8 hours when fully charged. The batteries simply snap into the “off ear” headset plastics, and are easily removed for replacement or recharging. Freshly charged spare batteries can kept be on hand for instant change out. The Multi Port Charging base (included) conveniently charges both the Com Center and the headset batteries. LED’s indicate individual battery condition Red – charging, Green – fully charged.

Be the first to review “ComSTAR XT Series” Cancel reply 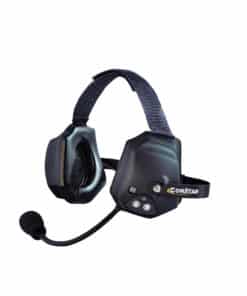